From staff reports
In a mostly unknown side of Watergate, former Whittier College alumnus Geoff Shepard (’66) will present a case against President Richard Nixon’s prosecutors through his recently published book, “The Real Watergate Scandal: Collusion, Conspiracy and the Plot that Brought Nixon Down” at 6 p.m. on Wednesday, Sept. 30, 2015 in the Wardman Library at Whittier College. A reception is slated at 5:30 p.m. 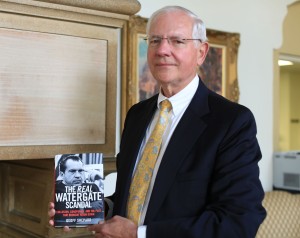 Geoff Shepard will rebuke prosecutors in the Nixon Watergate scandal at 6 p.m. on Wednesday, Sept. 30, 2015 at the Wardman Library at Whittier College.

Shepard was one of the transcribers of the White House tapes that eventually led to Nixon’s resignation in 1974.

More than four decades have passed since Watergate, one of the greatest presidential scandals in American politics, which continues to cause great debate and discussion. Richard M. Nixon ’34 resigned from his post as president of the United States, becoming the only presidential resignation in our nation’s history. But does the American public know what happened behind the scenes?

“My book focuses on the judicial and prosecutorial abuse in the Watergate trials and unearths astounding elements of collusion between the trial judge and the special prosecutors,” said Shepard, who served as the principal deputy to the president’s lead defense lawyer, J. Fred Buzhardt.
Shepard said he has uncovered evidence behind a comprehensive plan to remove the 37th president from office. Shepard shares in his second book about the Nixon administration his findings from his research.
“Going through 200 to 300 memos from the prosecution was like going through the playbook of the opposing team’s coach for the championship my team lost,” Shepard said.
Shepard’s career had an explosive growth in a short amount of time. A standout undergraduate, he earned a scholarship to attend Harvard Law which catapulted him to the Nixon White House as a White House Fellow in 1969. He was assigned to the Treasury Department and following his fellowship year, Shepard joined the Domestic Council staff at the White House, where he served for five years.
Shepard, who later on had a 35-year career in the insurance industry, shares several parallels of his life with President Nixon besides working at the White House and having the same alma mater.
As a first-year student, the Santa Barbara native took the required English course taught by long-time Professor Albert Upton. Upton’s teachings, based on his ground-breaking book, “Design for Thinking,” transformed generations of students’ way of analyzing, classifying, and communicating, including Shepard’s.
“As one of the youngest lawyers working in the White House, I wrote many memos on policy issues for the Domestic Council,” Shepard said. “President Nixon liked my approach and I suspect he could perceive Upton’s influence in them, since he also had Upton as his professor at Whittier way back in the 1930s.”
Shepard was a political science major and always knew he wanted to become a lawyer. He later became the first recipient of the Nixon Scholarship.
“I attended the student scholarship luncheon put on by the Republican Women’s Club of Whittier and Richard Nixon sat next to me,” said Shepard. “I wasn’t expecting him to be there.”
At this point, Nixon had been vice president of the United States, ran unsuccessfully for governor of California, and had dropped out of politics and relocated to New York to practice law.
“In his luncheon speech, Nixon compared the student government issues in his own campaign as student body president, with those of my own,” Shepard said. “I was very impressed.”
Young Shepard must’ve made quite the impression on Nixon because he later found out that the former vice president had doubled the amount of his scholarship.
Since 2010, Shepard has helped produce a series of Nixon Legacy Forums focusing on President Nixon’s various public policy initiatives. The forums are co-sponsored by the Richard Nixon Foundation and the National Archives, and have been broadcast on C-SPAN’s American History channel. More than 30 such forums have been produced to date.