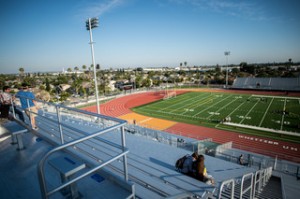 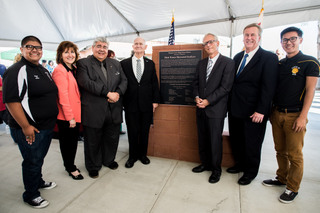 WHITTIER – The Whittier Union High School District unveiled its spectacular 7,000-seat football stadium at Pioneer High School – among the largest high school stadiums in the San Gabriel Valley – to the community during a grand opening ceremony on May 28.

The $17.5 million facility, built with proceeds from the $75 million Measure W facilities bond, was dedicated as the Dick Torres Memorial Stadium in honor of Richard Torres, who died in 2010 after serving more than 30 years as an educational leader and inspiration to Whittier Union students.

“We’ve been waiting with excitement for the day when we could open this district stadium and cheer on our student-athletes from the sidelines,” Whittier Union Board of Trustees President Jeff Baird said. “That day has finally arrived and I want to thank the community for supporting the need for premium athletic facilities in our schools and enhancing opportunities for our student-athletes to achieve excellence in academics and athletic competition.”

During the celebration, visitors toured the stadium, to be shared with Santa Fe High, and marveled the many improvements it will offer to the school community, including enhanced seating capacity – with 2,000 seats for visitors and seating for 5,000 for the home team – and upgrades that include renovated soccer fields, outdoor tennis courts, junior varsity and varsity baseball and softball fields, and concession areas.

Other stadium features include an elevator and press box, as well as locker and weight rooms, an equipment storage room and coach’s office with restrooms in a separate structure below. The stadium includes a nine-lane, multi-colored synthetic track that highlights passing zones, a feature found more commonly in colleges and universities, including UCLA’s famed Drake Stadium.

Torres’ wife, Mary, expressed her pride that her husband’s legacy will reach generations of students.

“Along with his own children, being an educator here was an important part of his life and allowed him to dedicate himself to helping students succeed and achieve their dreams,” she said. “It is an enormous privilege for me, our families, our children and grandchildren to see this beautiful stadium carry the Torres name. It is more than any of us could have ever hoped for.”

Torres began his Whittier Union career in 1969 as a teacher at Santa Fe, where he led the Expanded Horizons program, serving and motivating first-generation, college-going youths. He later served as Pioneer’s Assistant Principal of Business and Activities, a post he held until his retirement in 1991.

Torres continued to substitute as a teacher and administrator at every District school until his death.

Joe Duardo, a parent and community leader, lauded Torres for his role in growing the Horizons program at Santa Fe and for stressing the importance of parent involvement in increasing student success.

“Throughout his career, Dick demonstrated an uncommon dedication, enthusiasm and passion to advocate on behalf of all of the district’s students,” Duardo said. “Just as this stadium has been transformed by the renovation project, the district’s instructional program and the lives of thousands of students have been transformed, thanks to Dick Torres and the vision that he so fervently and persistently articulated.”

The Pioneer Class of 2015 will hold its graduation ceremony in the new stadium on Wednesday, June 3.

“We are elated to open this first-class athletic facility to our students who continue to distinguish themselves in the classroom and on the field,” Superintendent Sandra Thorstenson said. “To have the stadium bear the name of a man who inspired so many and left a lasting impact on everyone will serve as a reminder to this community that demographics do not determine destiny at Whittier Union.”

What would you do if your college-age daughter told you that her professor was making his students literally get naked for their final exam?

Why am I telling you this story? Friends … the future of our children is at stake. It’s easy sometimes to get bogged down in the rhetoric of the “culture wars” and lose sight of what we’re fighting for.

Make no mistake—if we surrender on issues like marriage, parental rights in education, and student privacy, it will get worse. Those who today are pushing radical sexualized education will not be satisfied until our children are forced to participate.

This is why PJI continues to fight for families and our young people. It’s why we continue to battle in court over the “co-ed bathroom bill,” AB 1266. It’s why we are a very active participant in the Privacy for All coalition. It’s why we developed a privacy opt-out form for K-12 schools.

Please continue to stand with us against those who (like this professor) do not have our children’s best interests at heart. I wish this young college student (who chose to remain anonymous) had reached out to Pacific Justice Institute so we could have confronted this outrage on her behalf. But I hope you will help spread the word about PJI to your family and friends so that other families who may encounter similar situations will get the help they need. As the days grow darker, may our light grow stronger!

Weigh in on Nelles re-use plan on Monday, May 4

WHITTIER – The city of Whittier will begin the first of four Planning Commission meetings considering the re-use of the Fred C. Nelles Youth Correctional Facility at 7 p.m. on Monday, May 4, 2015 at city hall, 13230 Penn St.

Participants may speak for three minutes during the public comments portion of the meeting.

Get motivated and help the Boys & Girls Club of Whittier by attending the first “Be Great Motivate” benefit from 5 to 7:30 p.m. on Wednesday, May 27, 2015 at the Rose Hills SkyRose Chapel, 3888 Workman Mill Road in Whittier.

Renowned motivational speaker John Coutis promises to uplift spirits and get a positive mood flowing for all those attending.

Hors d’oeuvres will be served. 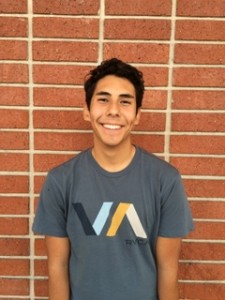 California High School senior Ivan Delatorre is one of a select 1,000 students from across the nation to be named a Gates Millennium Scholar. Delatorre will use the scholarship to pursue a degree in accounting at UCLA.

Scholarship will cover all college costs

With his mother sitting by his side, the 18-year-old and his mother began to cry when they realized he was one of a select 1,000 students from across the nation chosen to receive the Gates Millennium Scholarship, which will cover his unmet financial need to attend the University of California, Los Angeles through graduation.

Winners of the scholarship were officially announced May 1, 2015.

“I couldn’t believe I’d been selected for this award,” Delatorre said. “This is a huge honor and I feel so blessed. There’s no way I could have made it this far if not for the support of Cal High. I’m so proud to be a Condor.”

Delatorre, who holds a 4.3 GPA and is ranked seventh in a class of 720, was chosen from among 52,000 applicants for the Millennium Scholar Program, established in 1999 through a $1.6 billion grant from the Bill & Melinda Gates Foundation. The program helps high-performing students attain their dream of attending four-year universities and colleges through graduate school.

Delatorre plans to major in accounting so he can ultimately help local families and small businesses learn how to be as resourceful as possible and thrive, even when faced with limited budgets.

“My family struggled a lot throughout my life to make ends meet,” Delatorre said. “I want to give back and be a positive influence in the community that raised me.”

On campus, Delatorre has been heavily involved with numerous clubs and organizations, serving in roles that include Key Club president, vice president of the Scholars Academy and Interact, treasurer of the National Honor Society, a member of Senior Class Council, Expanded Horizons, American Red Cross Club, Blue and Gold Society and a LINK crew leader.

He is also committed to off-campus volunteering, assisting with sports physicals every other Saturday, volunteering at local food banks and other community-sponsored events.

“Ivan has embraced every opportunity during his four years at Cal High with enthusiasm and dedication,” Principal Bill Schloss said. “We are ecstatic for Ivan and admire how hard he has worked to become a Millennium Scholar. We wish him the very best as he enters this next chapter in his life.”

Delatorre attributes his success to the mentoring and support he has received at Cal High.

“It is because of Cal High that I’ve gotten this far. The teachers are great. All of the counselors are willing to help you. Every single staff member wants you to succeed,” Delatorre said. “Cal High offers so many programs to get you back on track to graduate. Everyone is friendly and approachable. They want you to go far and realize how difficult it can be.”

Delatorre plans to continue to dedicate his free time to helping those in need.

“Ivan has successfully managed balancing a rigorous course schedule with his commendable volunteer efforts, and we couldn’t be more proud of him for this incredible achievement,” Whittier Union High School District Superintendent Sandra Thorstenson said. “The Cal High community has provided Ivan with the academic, social and personal opportunities to thrive. We can’t wait to hear of the innovative, positive projects he will start in college.”