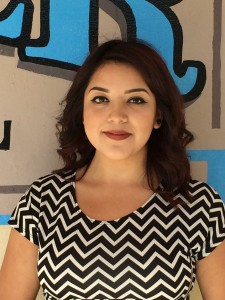 WHITTIER – Continuation high school students often face significant challenges in their quest to graduate. But former Frontier High School student Kathy Orozco has been able to weather many unlikely twists and turns in her life to successfully take on the challenge, and is now attending an elite four-year university.

Orozco graduated from Frontier High School, Whittier Union’s continuation school, in 2013. She began her first year at USC Marshall School of Business this January after making a tough decision to switch her career trajectory, a choice she made after channeling guidance she received at Frontier: “Something that you love is easier to learn.”

“Attending Frontier High was one of the best experiences I’ve ever had,” said Orozco, the first in her family to attend college. “The teachers were all so supportive. Each one of them is so different and perfect for what they are teaching.”

Orozco credits Frontier High for helping her develop leadership skills and providing her the motivation to continue her education.

“Frontier has a long history of providing students like Kathy the specialized and individual support they need to achieve in high school and beyond,” Frontier High School Principal Margie Moriarty said. “We are very proud of Kathy and wish her the best of luck as she continues on this journey and hope that other students who are receiving an alternative education on our campus will follow in her footsteps.”

Orozco was a bright student with good grades in her first two years at California High School. Then she became ill and required hospitalization for two months. When Orozco was able to return to class, it was recommended she temporarily transfer to Frontier to allow her to catch up on her studies. Though Orozco was skeptical, from the moment she arrived on campus she knew right away she would want her stay to be permanent.

Frontier transformed Orozco from a good student into a school leader.

“Being at Frontier really shaped my goals and who I wanted to be and has led me to where I am today,” said Orozco, who was a member of the school’s Associated Student Body and Soroptimist Club.

Upon graduation, Orozco enrolled in a local health science school, where a counselor urged her to apply to the USC School of Business. Orozco said she was interested in business as it would enable her to be her own boss, develop entrepreneurial skills and, especially, be an inspiration to her own family.

“I was amazed when they accepted me, and I am so grateful for all the opportunities I have been given along the way,” said Orozco, who also plans to attend graduate school.

Still, wherever her higher education takes her, Orozco said she is still a Frontier High student at heart, enjoying life, eager to learn and ready for any challenges that come her way.

“It is wonderful to see the dedication and initiative displayed by Kathy and other exceptional students who successfully graduate from Frontier High,” said Sandra Thorstenson, superintendent of the Whittier Union Unified School District. “We are appreciative of the educators at Frontier who positively impact our students’ well-being and achievement and prepare them for university-level work.”