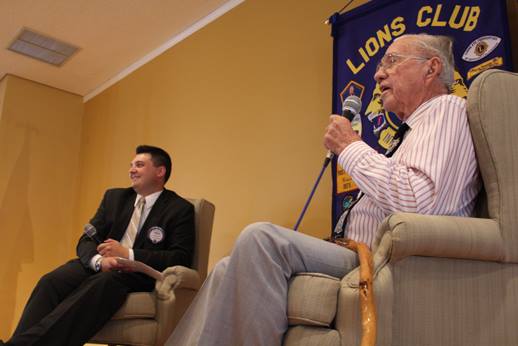 Emcee Paul White, left, roasts former Whittier Mayor Monte Wicker on June 25, 2013 at the American Red Cross building on Washington Ave. Wicker, a longtime Whittier Host Lions Club member, died Sunday of natural causes. He was 99. His funeral is planned for 10 a.m. Wednesday, Jan. 4 at First Friends Church on Philadelphia Street with burial to follow at Rose Hills. A reception in Wicker’s honor will be open to the public after the ceremony at the Whittier Museum, 6755 Newlin Ave., in Whittier.

This past year has claimed the life of yet another iconic American with the passing of Fremont Edward “Monte” Wicker. The former Whittier mayor and longtime owner of Monte’s Camera Shop died of natural causes on Sunday at Southern California Acute Care on Sorenson Avenue. He was 99.

The man with the booming baritone voice, easy smile and perpetual gleam in his eyes served on the Whittier City Council from 1962 to 1974 and was Whittier’s mayor from 1964 to 1966. Wicker was born in his parents’ Whittier home on May 22, 1917 and wended his way through Whittier schools before graduating from UC Davis in 1939.

Son Kim Wicker said his father originally wanted to be a veterinarian, but followed his passion for photography and turned it into a career when he opened Monte’s Camera Shop in 1948. The longtime motorcycle enthusiast was past president and a member of the Whittier Host Lions Club, a service organization that gives away thousands of dollars every year in college scholarships and free eyeglasses to the underserved in Whittier.

In an interview in August Monte recounted the time he and a friend smuggled bottles of beer into the old American Red Cross building on Washington Avenue using a string dangled from the third floor window. Or the time he and Hubert Perry raced soap box derby cars down Greenleaf Avenue. He hinted at more than a few brushes with the law.

“He was an instigator,” said Whittier Host Lions Club President Ben Greer. Monte’s father, Lewis, helped found the service club in 1922. “Monte has been a member for, like, forever. He was heavily involved in everything that made the club great. All the fund-raisers, the horse show. For our newer guys in their 60s and 70s he’s like a long lost link to the past. He kept us in stitches with his sense of humor. He was just an active guy and the older guys just revered him. He and his antics are constantly talked about. He will be sorely missed.”

Greer said past members like Wicker and Perry wove the cultural tapestry that makes Whittier a unique and caring community.

Kim Wicker said his dad met Ellen Chilton in high school and the sweethearts were married in August of 1939. They had four children: Joelyn “Jolly,” Chris, Mark and Kim. Jolly died from a sudden illness when she was 15. Monte leaves behind four grandchildren, Lisa, Mark, Alina and Tara and five great-grandchildren.

After a stint with Southern California Edison, Wicker worked for the California Department of Fish & Game before being drafted into the Army in 1945. He served stateside before opening his camera shop in 1948. Aside from the Lions Club, Monte also had leadership roles in the League of Independent Cities, the Southeast Mosquito Abatement District, the Whittier Uptown Association, Whittier College and the Bank of America Advisory Board.

After Ellen Wicker died of melanoma in June 2000, Monte fell in love with Beverly Harris, who he met while performing in Whittier Community Theater. Beverly and Monte were inseparable until his death.

Monte loved to perform and often would belt out a tune for his fellow Lions. Although his harmonica was always at the ready, “he played a mean clarinet,” Kim said.

“I remember going into Monte’s Camera as a kid and Monte showing me how to properly use it,” said Mayor Joe Vinatieri on Wednesday. “As a young man, Monte was a person on the City Council and understood who we are as a community and the values for which we stand. As mayor, Monte meant to me a person who gave me advice regarding several issues. I saw him in a different light as I grew older.”

Kim summed up his father’s life: “I would say he was easygoing, very musical and almost always happy.”

Funeral services are planned for 10 a.m. on Wednesday, Jan. 4 at First Friends Church, 13205 Philadelphia St., with burial to follow at Rose Hills. A reception honoring Monte’s life will follow at the Whittier Museum, 6755 Newlin Ave.