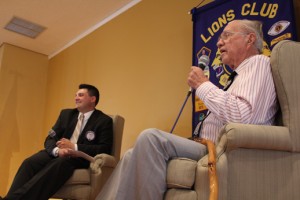 Paul White, left, interviews former Whittier Mayor Monte Wicker during the Whittier Host Lions Club meeting on July 25, 2013, at the American Red Cross building on Washington Avenue. Wicker, 96, was feted for his longevity and his community involvement. His harmonica playing brought the packed house down.