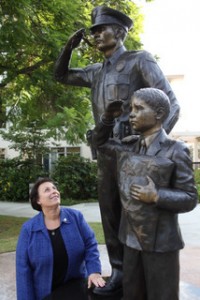 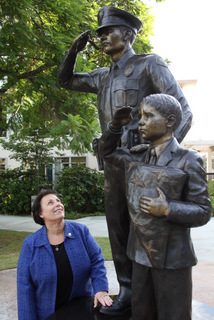 Fran Shields reflects on her 42-year career with the city of Whittier beside one of her proudest achievements, the 2010 Whittier Police Memorial on Wednesday, Oct. 28, 2015

‘Hand it to Fran’ set to retire on Dec. 4
By Tim Traeger
Editor
411whittier.com
WHITTIER – Put a starving kid in a candy shop and you have a hint about the career of Fran Shields. They say if one loves what they do, they never work a day in their life. So after 42 years with the city of Whittier, on Dec. 4, 2015, Frances Leone Moretta Shields will retire with zero hours on the books.
Because she’s loved every minute.
Her Italian-borne exuberance as director of parks, recreation and community service has fostered a plethora of too many things that make Whittier a wonderful place to live. Many of the statues and monuments to arts and culture come as a direct result of her passion. So do the multitude of programs that make the some $13 million department she’s ran since 2010 come to life.
When Whittier residents take their dogs to their very own dog park, Fran is there. When they walk or bike the Greenway Trail, Fran is there. When seniors get a nutritious meal every day, Fran is there. When your child goes swimming in a city pool, Fran is there. When the police honor a monument to their lost heroes, Fran is there. When thousands of people come together as a community 12 times a year to hear concerts in the parks, Fran is there.
You might say, Fran has left her legacy everywhere.
Shields was born here 61 years ago and never left. At a lofty 4-foot-nothing, the beloved dynamo said why go anywhere else?
“It’s about quality of life. I’m not just saying that because it’s the stock answer. It IS about the quality of life. It is about what Whittier is in creating that sense of community and making sure people have things to do that are fun and to expand their knowledge.
“The families that come out to the concert series, it’s the best thing we do. We get 3,000 to 4,000 people coming out for one night. And it’s the whole family, grandma and grandpa and the kids. And we’re bringing them together, we’re helping that family unit do something together,” Shields said from her spartan yet smartly decorated office at City Hall.
The Sierra High School grad (before it became a ‘continuation school’) began her career at the city as a police dispatcher in 1975, “her dream job.” She met her husband, Mike, who was working in the city’s fire department, and the union produced two boys, Sean and Brian, and five grandchildren. Titles held along her illustrious career include secretary in recreation, office services supervisor, management assistant, community services manager, director of community services and director of parks, recreation and community services, the longest title held by any city employee.
In 2000 she returned to academia and earned her bachelor’s degree in public administration from the University of La Verne.
People don’t want to see her go. She has a fervent hand in many Whittier institutions including the Whittier Cultural Arts Commission, “Activate Whittier” and the Whittier Community Foundation, which has raised more than $400,000 for programs in Quakertown, including the Police Memorial of 2010.
“It was one of the biggest highlights of my career,” she said.
Aside from presiding over the city’s 22 parks, two senior centers, 54 full-time employees, 200 part-time workers and 100 volunteers, Shields has served as president of the Whittier Police Officers Association and spearheaded the Art in Public Places initiative, which was paid for with a half-percent tax placed on any development worth more than $250,000.
“The arts are really special to me. When I started working with the Cultural Arts Commission, it was like opening a new world to me. The Art in Public Places program, we have 14 pieces, all came under my watch,” Shields said.
Fran is an enigma in a world frustrated by governmental bureaucracy. And her humble smile is endearing. She said a tight-knit community like Whittier is unique because it cares about its people.
“And that’s it. They talk about traditions. They’re family values, they’re supporting each other. That’s what it’s all about.”
In retirement Shields said she will continue her penchant for stitching and crafting. She’s also held a longstanding love of dancing. She proudly pointed to a simulated disco ball trophy she earned in 2014 while participating in the Soroptimist Club’s “Dancing With The Whittier Stars” gala.
Fran is afraid of flying, so she and Mike will place a great strain on their motorhome in the years ahead. She said her dream is to take time off from everything and traverse this great nation.
On Thursday the Whittier Host Lions Club honored Shields for her service at Parnell Park, another one of her favorite recreational haunts and home to Whittier’s only petting zoo. Over the years Shields has helped the service club do great things in bolstering Whittier’s quality of life.
Past Lions Club president and former state sen. Frank Hill said the club got a kick out of ribbing the parks director for what may be the last time.
“You’ve got to hand it to Fran. Because Fran is so short you have to hand everything to her,” Hill said. “Whittier is a great place not because of the great schools, because we have great schools, or the great neighborhoods, because we have great neighborhoods. It’s because of the people. And no one is more special to Whittier than Fran. She retired after 42 years, but it was never a job to her. It was all about her passion and commitment to the city.”
White-Emerson protégé Paul White then presented Shields with a bouquet, assuring her they were NOT stolen from the longtime Whittier mortuary.
Fellow roaster and Lions Club past president Eric Day told Fran to grab a seat up front. “Let your legs dangle, they won’t hit the floor.”
What was the worst thing about her 42-year tenure?
A teary-eyed Shields simply said:
“Leaving.”