Poets hit the gridiron in 2013 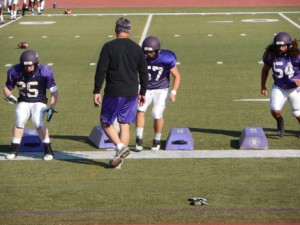 The Whittier College football team works out during a recent practice on campus. (Photos by Eric Terrazas)

WHITTIER – After turning in its best season since 2007, Whittier College is expressing high hopes for its football program in 2013.

The Poets, who finished 4-5 overall and 3-4 in the Southern California Intercollegiate Athletic Conference (SCIAC) last year, are seeking to take that next step.

“We did some good things last year,” Whittier College coach Todd Stratton said of the 2012 season. “It was up and down. We had the No. 4 offense in the nation but we were the most penalized team in America. We’re focusing on the fundamentals and eliminating mistakes and penalties.”

Sophomore quarterback Steven Rivera returns to guide the Poets’ offense. Last season as a freshman, Rivera threw for 1,893 yards and 18 touchdowns while completing 127 of 230 attempts.

The senior duo of running back Anthony Walker and wide receiver Matthew Asaro both figure to give Rivera a helping hand.

Senior running back LaFelton Traxler, who ran for 105 yards on 33 carries, also returns.

Junior wide receiver Diante Jackson, who received a scholarship to Oregon coming out of high school, will look to make an impact for the Poets.

“We addressed a need in the secondary,” Stratton said. “We brought in four junior college defensive backs who are absolutely fantastic.

“We’re talented and young,” Stratton said. “We feel like the program is going in a great direction and we’re excited about the season.”

The Poets opened their year Sept. 14 with a disappointing 38-17 defeat at Whitworth. Whittier College will seek to rebound Sept. 21 as it hosts Puget Sound in its 2013 home opener. The Poets will open SCIAC play Oct. 5 at Chapman.