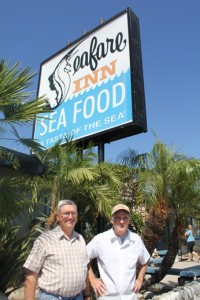 Gary, left, and Scott Milhous have run the Seafare Inn in Whittier since their parents, Bill and Dorothy, retired in 1984. Bill Milhous, second cousin to the 37th president of the United States, Richard Milhous Nixon, died on Aug. 18 from complications of Alzheimer’s Disease. He was 90.

By Tim Traeger
Editor
411whittier.com
Whittier is a good 25 miles from the Pacific Ocean, yet Bill Milhous and his wife, Dorothy, brought the sea to this landlocked Quaker community 52 years ago. He died Aug. 18, 2013 after a long bout with Alzheimer’s Disease. People in Whittier will miss his integrity, business acumen, perseverance, faith and dedication. Not to mention his outstanding seafood.
“The only thing I can say about my dad was his integrity and hard work,” said eldest son Gary Milhous, 65. He said his dad, an avid pilot, served in the U.S. Navy in World War II and the Naval Reserve afterward. It was then he came across Anthony’s Fish Grotto in San Diego and saw a business model that just might fly in Whittier.
After a long stint working with Don Nixon at Nixon’s Grocery Store and Coffee Shop on Whittier Boulevard – one of five Nixon-owned markets stretching from Fullerton to Whittier to Anaheim – Bill Milhous opened a burger joint called Whirly’s along the city’s main drag and at the same time founded the Laurel Café, the precursor to Scotty’s Restaurant.
It was tough going early on. But the aforementioned hard work and integrity paid off.
Bill and Dorothy were on opposite ends of a double date in the early 1940s. She liked Bill better than her intended beau and the union stuck. Four children, six grandchildren and great-grandchildren later, the love affair endured.
“They did everything together. They worked together all their lives, they never went anywhere without each other. She died 10 years ago to the day that my dad died,” said Scott Milhous, 55. “About two years after she died my dad was diagnosed with Alzheimer’s. It progressed slowly. Finally about six months ago, he wandered off and fell down. Since then he needed 24-hour care.
“About a week ago he had a heart attack, pneumonia.”
His death leaves a hole in the community as deep as the sea he loved. One might say the Seafare is an institution in its own right. And they would be correct. The Milhouses founded the unique restaurant in 1961 in an old steakhouse building at 16363 E. Whittier Blvd. The family has been serving up fried and broiled seafood, lobster, crab and halibut ever since.
Bill and Dorothy retired in 1984, often flying to their vacation home in Oregon. Their love for East Whittier Friends Church never waned, a true testament to their devout Christian beliefs. There was even one year when Bill offered a special deal at the Seafare on Easter Sunday where patrons could write the name of their favorite church on the back of the bill and get a 10-percent donation based on the size of the meal given to their favorite place of worship.
“To drum up business, Bill went to area churches and offered a discount coupon. Write on the back of your bill what church you attended and he would give 10 percent to the church,” Gary said. “Back then, most meals were $1 or $2. A $3 meal was a high-ticket item. He was going around on Monday to all these churches leaving off 35 cents. Maybe $3. It was amazing.” 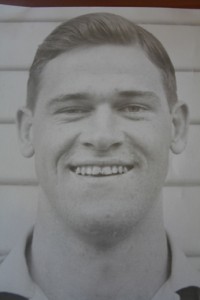 William Alan Milhous, second cousin to President Richard Milhous Nixon and co-founder of the storied Seafare Inn in East Whittier, died Aug. 18, 2013 from complications of Alzheimer’s Disease. The father of four is seen here from the early 1940s, when he lettered in football, basketball and track 10 times at Fullerton Union High School. The Navy veteran of World War II was a staple businessman with his wife, Dorothy, for decades in the Whittier area. He was 90.

Gary and Scott said the “Milhous” notoriety gained access to Richard Nixon’s inaugurations in 1968 and 1972, but the name itself really wasn’t a big deal.
“Richard was 11 years older (than Bill Milhous) so there was that age difference. Bill went to the inaugurations, that was exciting,” Scott said. “They knew each other but it wasn’t like they were best friends.”
After high school Bill Milhous attended Fullerton Junior College with Dorothy and both went on to U.C. Berkeley. He was an engineering major, she studied economics and business. The union worked well when they went into business together.
The problem with his dad joining the Navy, Gary said, was that his dad got seasick. A lot.
“He spent a lot of time over the rails.”
As the war wound down, the Navy didn’t need as many pilots, so Bill became a radar officer aboard the USS James E. Keyes.
Asked about the ongoing success of the Seafare Inn, Gary shared a simple formula.
“I’d say keep it simple. Not getting too extravagant. One thing. Between my brother and our wives, we do most of it. We’ve got a lot of great employees, but one of us is here all the time.
“We’re pretty darned lucky.”
Bill Milhous is survived by his sons, Gary (Shelley) and Scott (Clare), daughter Marianne Wiggins, Sharon and Dave Delano, six grandchildren and great-grandchildren.
Bill Milhous will be cremated at White Emerson Mortuary and his ashes scattered at sea, along with his beloved wife, Dorothy.
“The best thing about this place is my mom and dad,” Gary said about the Seafare Inn. “Every now and again someone comes in and just starts talking about my mom and my dad. One guy came in from our church and said how much my dad helped him. He said my dad bought him a car so he could get to work. ‘I’m thinking, wait a minute, he always made us buy our own cars. But he always gave us the opportunity to come in and work and make enough money to buy our own cars.”
Tim Traeger is former editor of the Whittier Daily News. He can be reached at 626-646-7352 or by e-mail at ttraeger@411whittier.com. Follow him on Twitter at @411whittier.com