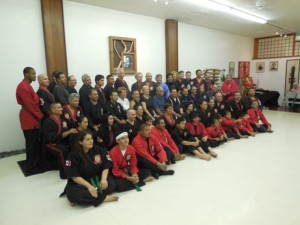 By Robert Rosenblatt and Eric Terrazas

www.411whittier.com
WHITTIER – The world of the Polynesian martial arts came together July 14, 2013 at the Aikido Ai of Southern California dojo located at 6725 Comstock Ave.

Richard Nunez, a Whittier resident and one of the founders of the first Limalama association, sponsored a gathering of top masters and grand masters to demonstrate Limalama, which is a unique hybrid style of self-defense.

The event also featured a graduation ceremony for different ranks from first-degree to ninth-degree black belt. Honorees in attendance included black belt Hall of Fame masters from Mexico and California.

Fabricio Gomez of Tijuana Limalama presented a strong exhibit of the street-fighting style in front of an audience that packed the studio. Gomez was promoted to ninth-degree black belt by Grand Master Nunez. Nunez and Solomon Kaihewalu are the last two surviving original members from the first Limalama association, which started the system of martial arts known worldwide as the inside, close, in-your-face style of Limalama.

One of the graduates was Bob Brown, a Whittier resident who was promoted to seventh-degree black belt. Brown is a former United States Secret Service agent and worked as a detective with the Pasadena Police Department. He is a master weapons instructor in knife and stick fighting and helped guard Presidents Ford and Reagan, serving as their driver and last line of defense.

Another honoree was Mario Vasquez, a Whittier resident who was promoted to fifth-degree black belt.

“It felt good,” Vasquez said of his achievement. “It was something I worked hard for – putting in the hours and the days.”

Gabriel Zayas, who holds an eighth-degree black belt, was also in attendance. Zayas is the founder and CEO of the International Polynesian Martial Arts Organization, and owns 20 schools of Limalama in Mexico and two schools in Los Angeles.

Zayas and Nunez will help host the 13th annual international “War of the Warriors” martial arts championships, which will be presented by the International Polynesian Martial Arts Organization. The event is scheduled for Sunday, July 28, 2013 at the DoubleTree Hotel, 13111 Sycamore Drive in Norwalk.