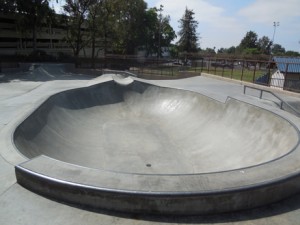 The city of Whittier’s skatepark is located adjacent to the Community Center, 7630 Washington Ave.

WHITTIER – Whether you’re driving through Whittier or any other Southern California community, you just might see skateboarders in action during your trip from Point A to Point B.

Several cities in Southern California feature their own skateparks, giving skaters the opportunity to work on tricks such as ollies, 180s and kick flips.

Whittier’s skatepark is located adjacent to the city’s Community Center at 7630 Washington Ave.

A few youngsters decided to spend some of their free time at Whittier’s skatepark during a recent sunny Saturday morning in August.

One such young skater was Henry Dominguez, 15, of Montebello, who was practicing his moves.

“I never liked sports,” Dominguez said. “Sports are based on skills and stats. Skateboarding is based on style and creativity. It’s fun and it’s good exercise.”

Dominguez, who has been skating for five years, said that watching the X Games and star performers such as Tony Hawk and Bob Burnquist attracted him to skateboarding.

“I guess my older brother helped me get into skating too,” Dominguez added.

Rodrigo Tafoya, 23, of Whittier, was also working on his maneuvers.

Tafoya said he was drawn to skateboarding when he “saw his friends do it.”

Since first gaining popularity in the 1960s, skateboarding has mostly held a strong presence in Southern California.

After a popularity lull that happened in the late 1960s, the sport started to grow once again during the mid/late 1970s – thanks to the emergence of soon-to-be legendary skaters such as Jay Adams, Tony Alva and Stacy Peralta.

The sport has moved more into the mainstream in recent years due to the continuing success of the X Games, which started in 1995.

Other nearby cities that have skateparks include Montebello and La Habra. Montebello’s skatepark is located at City Park, 1300 W. Whittier Blvd. La Habra’s facility is at Bonita Park, 1250 Fahringer Way.

Travis Swope, manager of Two Felons Skate Shop located at 14125 Lambert Road in Whittier, believes the sport’s accessibility has played a major role in its growth.

“It’s still popular because it’s diverse,” Swope said. “It doesn’t belong to any one group – it’s open to anyone. Anyone can learn how to ride a skateboard. It’s low-cost transportation.”

Swope added, “The future is wide open. There are no limits in skateboarding.”

The Two Felons Skate Shop sometimes hosts contests and demonstrations. For more information, call 562-698-8199 or visit facebook.com/twofelons. The shop can also be followed on Twitter @twofelons.

Another place that caters to the skating crowd is Legends Boardshop, 6725 Greenleaf Ave. in Whittier. For more information, call 562-696-1482.