Another look at things in Sacramento 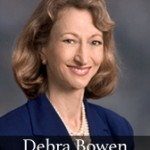 A Sacramento judge has rebuked Secretary of State Debra Bowen for seeking to prevent thousands of signatures from being counted in a referendum drive against the highly controversial Co-ed Bathroom Bill.

Judge Allen Sumner of the Sacramento County Superior Court issued a tentative ruling granting the writ petition of referendum supporters to have thousands of signatures counted that were delivered to the Tulare County clerk’s office before the deadline but were not accepted until after the deadline. Although tentative rulings are not official, they offer a preview of the court’s reasoning and are nearly always adopted as the official ruling of the court.

The Pacific Justice Institute is co-counsel in this case representing the referendum proponents. The president of PJI, Brad Dacus, commented, “Every Californian regardless of ideology should be encouraged by this ruling that strongly supports the fundamental right to have referendum signatures counted when they are delivered to county clerks ahead of the referendum deadline. These rights are too important for the Secretary of State, or a county clerk, to play politics when they don’t like a particular referendum.”

PJI also expressed concern about misinformation that is being spread by the Secretary of State’s office and some media outlets as to the current status of AB 1266.

“Quite simply, the law has not gone into effect because proponents have delivered more than enough signatures to place it on hold,” noted PJI attorney Kevin Snider. “It is mere wishful thinking on the part of politicians and activists to declare that the law is in effect. The California Constitution says otherwise, and even the Secretary of State has agreed with our position for other referenda that she deems less controversial.”

The law that has been placed on hold, AB 1266, would require all public schools in California to allow self-identified transgender students to choose the bathrooms and locker-rooms they want to use, as well as the sports teams they want to join, regardless of their anatomy or the objections of other students

Polling has shown the law to be unpopular among Californians. The Privacy for All Students coalition delivered abut 619,000 signatures to county clerks throughout the state in November. When about 505,000 of those signatures are validated, the issue will be placed on the ballot statewide in November, 2014.

Brad Dicus is president of the Pacific Justice Institute.