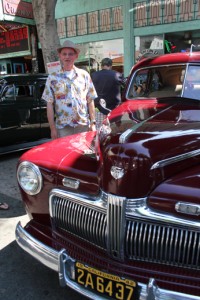 By Tim Traeger
Editor
411whittier.com
WHITTIER – Fine metal met the road Saturday, Aug. 17, 2013 and drew literally thousands of automobile aficionados to the Uptown area to view more than 300 of the toniest vehicles known to man.
Sponsored primarily by the Whittier Uptown Association, the 13th annual Uptown Whittier Car Show featured everything from muscle cars, low-riders, trucks and hotrods but it was more than that. Behind each entry were stories of love and commitment. Not to mention thousands of dollars.
For Joe Schlueter, who has lived in Whittier since 1968, his 1942 Ford Super Deluxe is his baby.
“It’s a very rare bird. It’s been completely restored. Everything is original,” he said. “I think (the car show) is awesome. I think it’s getting bigger and more wonderful every year. When you get married and have kids and then the kids are gone, that’s when you buy your toys,” Schlueter said.
“We bought them toys throughout the years and now this is my toy, my around-town car. It doesn’t go on the freeway. It just goes on city streets and I drive it every day.” Before retiring Schlueter worked 36 years for GTE, Ma Bell and Baby Bell. He drives a 1929 Ford Model A every year in the Whittier Christmas Parade.
The show brought entries from all over the Western United States, even some from Canada. Yet with Whittier’s long-storied love affair with classic cars, many of the entries were local. The only prerequisite was that all makes and models were 1979 and earlier.
“VWs are unique. They’re special. They’re in a class all by themselves,” said Mark Renwick, 45, of Whittier. His VW Veeda car club helped sponsor the event. But the real reason behind the entry of his 1964 Beetle was the camaraderie.
“Realistically, it’s the people. The people are like family,” Renwick said.
VW Veeda club President Quick Perez, 46, of Norwalk, echoed that sentiment.
“For me it’s the people. Cars are cool but it’s the people that you meet and interact with. That’s the best part of it,” Perez said.
Vintage vehicles weren’t the only attraction. There were marching bands, live music, food stands and more.
You could even get a haircut thanks to Uptown Barber, which entered a 1941 Plymouth coupe into the show.
Bruce Hearn, 58, spotted his 1962 early Vietnam-era Jeep in the La Habra Hills. It wasn’t in good shape. He offered the owner $500 to haul it away and struck a deal.
Several years and lots of money later, his entry was a main attraction at the show.
“I restored the whole thing over a period of years and now it’s cool for the kids to play on,” said Hearn, who works in the transportation and marketing field. “This is a great car show. Besides, it’s close to home,” said the Whittier resident.
“Being in Uptown the car show is close and it’s pretty large,” said Los Angeles County Fire Captain Sergio Burciava. The Whittierite has three Chevrolet Camaros, but the 1969 rally green Z28 he brought with his son, Gregory, to the show was over the top. He estimated its worth to be between $60,000 and $70,000.
“Everybody’s pretty friendly here. The atmosphere in Uptown has always been a nice place to play.”
The Whittier First Day Coalition provided 15 volunteers to help erect and man barricades to ensure the safety of the car-loving throngs, according to First Day’s Pat Bouchard, 66. Bouchard tooled around on a golf cart to make sure the event ran smoothly.
“It just brings the community together,” Bouchard said of the show. “Everyone gets the chance to come out and see the hot metal in Whittier. Our car shows have gotten a lot of good reviews.”
Tim Traeger is former editor of the Whittier Daily News. Contact him at ttraeger@411whittier.com or call him at 626-646-7352.